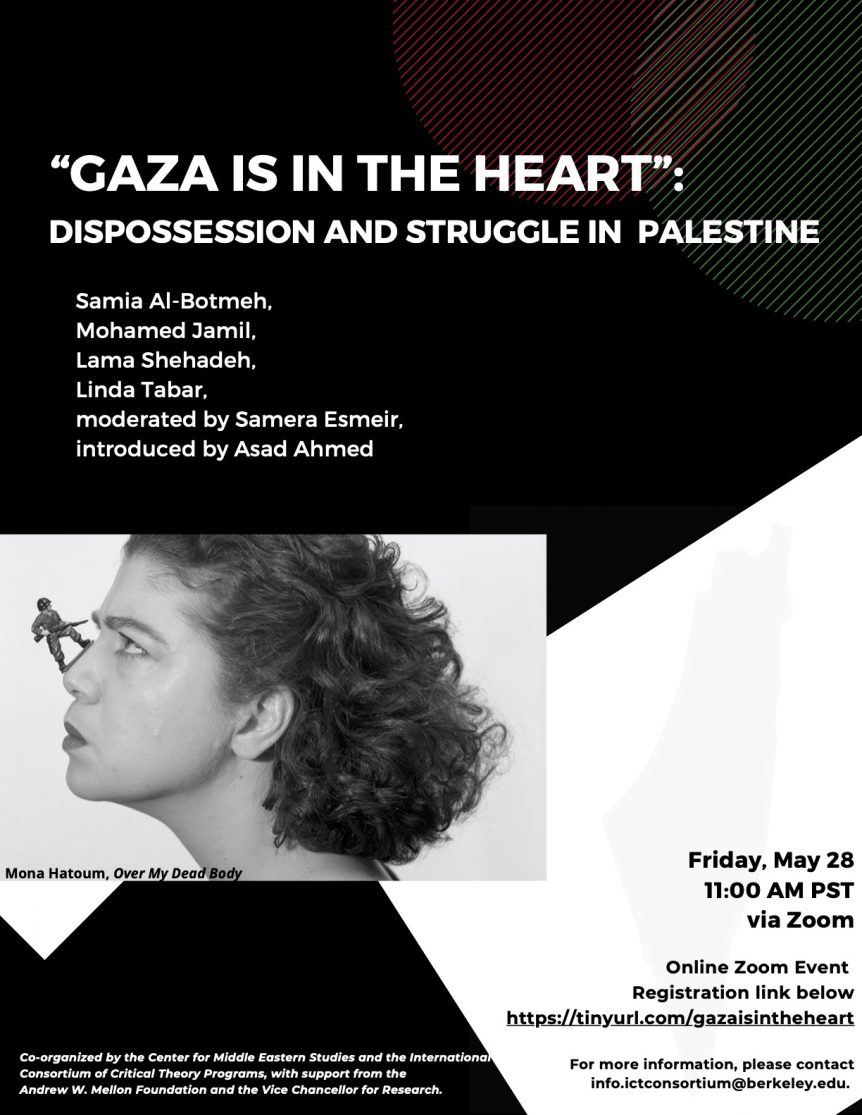 “Gaza is in the Heart”: Dispossession and Struggle in Palestine

A conversation about the mechanisms of settler-colonial rule in Palestine and practices of steadfastness to confront this rule. Scholars and activists based in Palestine discuss methods and targets of colonial power and reflect on the present state of Palestinian struggle as it has become intertwined with life itself.

Samia Al-Botmeh is assistant professor of economics at Birzeit University. Her research focuses on labor economics and the political economy of development. Previously, Al-Botmeh worked as senior researcher and coordinator of research at the Palestine Economic Policy Research Institute (MAS) in Ramallah. She has published extensively on contemporary Palestinian economics, labor markets, gender differentials, and the political economy of development under colonialism.

Mohamed Jamil holds an MA in general management from Cardiff Business School (UK) and an MA in Middle Eastern history from Freie Universität Berlin. The former head of the Student Union in Gaza, he currently works on several joint projects in Gaza between the UN, local NGOs, and the public sector. He is a regular contributor of opinion articles to such media outlets as Alsafir in Beirut and Mada Masr in Cairo.

Lama Shehadeh is a Palestinian architect and urban planner from Kufr Yaseef, Galilee. She earned  an MA city and regional planning from Cornell University. Shedadeh’s research focuses on the intersection of architecture and urban planning with spatial justice, environmental and political conflicts, and social formation. Shedadeh worked in city planning departments in Pittsburgh and Washington, DC. Currently, she works on master plans for Palestinian towns and villages within 1948’s borders.

Linda Tabar is a scholar of global systems of power, colonial violence, dispossession, and feminist and decolonizing struggles as well as their transnational reverberations. She is currently completing a book manuscript, entitled Palestine, Memory, Decolonization: Indigenous Encounters with Modernity and Imaginaries of Liberation. Her articles have appeared in a variety of journals, including Decolonization: Indigeneity, Education & Society, Third World Quarterly, New Political Economy, Journal of Palestine Studies, and Comparative Studies of South Asia, Africa and the Middle East. She has taught in Palestine, the United States and the United Kingdom.

Samera Esmeir is associate professor in the Department of Rhetoric at UC Berkeley. She is the author of Juridical Humanity: A Colonial History. She is currently working on a book manuscript on Palestine’s struggles, titled The Struggle that Remains: Between World and International.  Esmeir is the senior editor of Critical Times: Interventions in Global Critical Theory.

Asad Q. Ahmed is professor of Arabic and Islamic Studies in the Department of Near Eastern Studies and Affiliate Faculty in the Department of Philosophy at UC Berkeley, where he also directs the Center for Middle Eastern Studies. Ahmed specializes in early Islamic social history and pre-modern Islamic intellectual history. He is the author of The Religious Elite of the Early Islamic Hijaz (2011), Avicenna’s Deliverance:  Logic (2011), and Palimpsests of Themselves:  Logic and Commentary in Muslim India (2020).  He is also the co-editor of several collected volumes.

Co-organized by the Center for Middle Eastern Studies and the International Consortium of Critical Theory Programs, with support from the Andrew W. Mellon Foundation and the Vice Chancellor for Research.